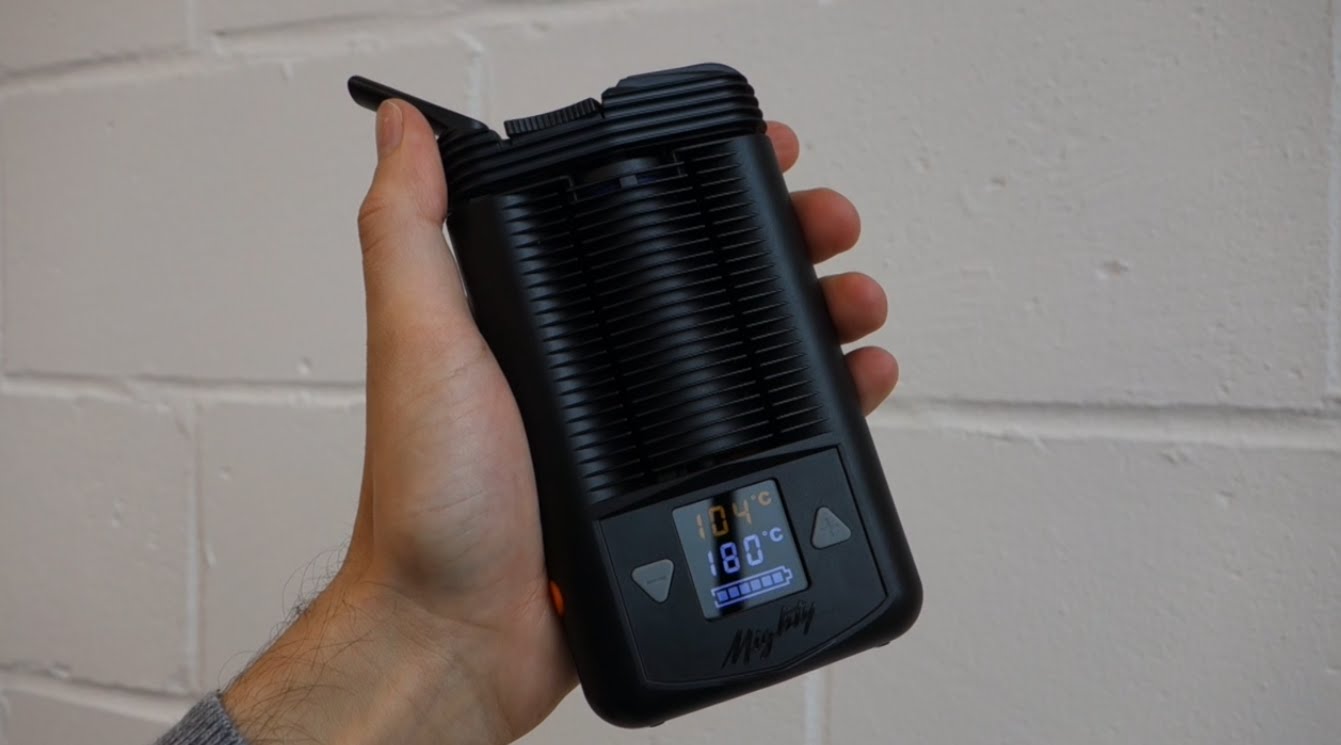 The Mighty, from Storz & Bickel, is the big brother to the Crafty. While the Crafty is smaller and sleeker, the Mighty’s beefy nature looks like it can mostly be attributed to it’s dual lithium-ion battery. We’re really excited to get vaping with the Mighty, so let’s get right into it.

HOW DOES THE MIGHTY WORK?

The Mighty should come with its internal battery completely charged, as ours did; but if it doesn’t have a charge on it, charge your internal battery fully using either the included Power Cord or the Car Adapter (sold separately), which means you’ll see all six fields on the battery meter fully illuminated. If the battery is nearly discharged the indicator will blink repeatedly to let you know that you’re about to run out of juice. It takes roughly two hours to fill the battery from a complete discharge. Let’s assume you’ve charged up your Mighty and are ready to vape.

To turn on the Mighty, simply hit the big ON/OFF button on the bottom of the device for one second. The vaporizer will buzz for a second to let you know it’s on. If you don’t hear and feel the vibration, this means there is an issue and you should contact Storz & Bickel immediately.

Loading the Mighty is a pretty easy process as you can set the Herb Mill (grinder) on top of the filling tray, grind your weed and then use the cylindrical filling aid to deposit the right amount of herb into the heating basin. if you’re minding the lines on each of these pieces, you’ll never run the risk of overfilling the chamber which in most vapes tends to yield combustion or uneven vaporization. These Storz & Bickel devices are pretty damn foolproof when it comes to vape efficiency, but they make them even more idiot proof with the help of the Filling Aid.

We definitely enjoyed the speed with which the Mighty reached our selected temperature. This is a great vape for medical patients who may be new to using herbal remedies like dried cannabis or marijuana extracts in order to get relief from serious diseases such as PTSD, fibromyalgia, or multiple sclerosis (MS).

True to its name these are certainly some mighty big clouds forming out of this thing. When we started out we used White Widow, a relatively thin and flakey sativa-dominant hybrid so we put the temperature at 375°F, which is the preferred range for vaping THC; the vapor was consistent and not too harsh or hot.

Upon subsequent sessions, we cleaned out the chamber and used Grand Daddy Purple, a classic indica, to really test the vaporizing power of the ceramic heating chamber. We decided that for this one a higher heat setting would be ideal so we could get full extraction of both THC and CBD content of the weed. We put it up to 395 degrees and, not surprisingly, the hotter cook yielded much thicker, more robust clouds of vapor.

The design of the vapor path itself is absolutely flawless. You see the heat is generated in the base of the device where the LCD display lives and then it moves up through the insulated chamber in the middle of the vape to the loading bowl where the hot air creates a convection current through and around the shredded leaves.

What was nice was the feeling against the back of our throats. We all agreed that the hits were potent and tasty, but they weren’t super abrasive. Certain portables like the Firefly and Pax provide fast heating but the hits are really sharp and sting the mouth and throat. This makes them more recreational than actual medical devices.

If someone’s never smoked weed before, and they want to try it out, the Mighty is the perfect intro to the practice; true medical users will really enjoy the consistency of the vapor produced by this heavy duty portable. Hardcore recreational vaporists will get a kick out of it too, especially once they try the concentrate pad.

WE HAD TO FIND SOMETHING TO COMPLAIN ABOUT

We weren’t so much a fan of the plastic mouthpiece, seems to be obscuring the taste of the vapor. This was more pronounced with the Crafty than the Mighty, but we still noticed a bit of plastic overtone when we were inhaling. For whatever reason, it seems Storz & Bickel is still unwilling to embrace the demand for glass delivery in the marketplace. If you’re going to spend $200+ and you’re a flavor connoisseur, you should check out our review of the miVape and the Ascent vaporizers.

Another strike against the Mighty is its size and exterior. The vape is about as big as a Samsung Galaxy cell phone (but double the width); though it looks cool, unfortunately it’s not that comfortable to hold. The exterior is made from hard plastic and you have to grip these thin, horizontal slats with your palm or fingers, which is kind of stressful on your hand.

We don’t mind the size so much (though it’s definitely not discreet); what we really disliked is how the unit got warm without any kind of padding or matte finish like the Pax does. The Ascent, by contrast, uses an insulated exterior so your vape feels pretty much exactly the same when its off as when it’s at full heat level.

IS IT EASY TO CLEAN & MAINTAIN?

The Volcano Mighty Vaporizer comes with a cleaning brush included, so getting your vaped bud out of the chamber is no problem. Once you’ve swept everything out with the brush, you can use a q-tip or just blow gently into the chamber to release any caked on residue. It’s important that you remove as much plant material as humanly possible before switching over to using concentrates like oils or wax.

I like to use a moist Q-Tip to clean the screen. You’re in no danger of harming the heating element because there is actually a second filter directly below the screen so it’s a true convection current happening: no danger of combustion whatsoever. They even added a little orange cleaning pick that lives at the very bottom of the device for good measure.

To charge the Mighty Vaporizer, simply plug it into the wall adapter and turn off the power to give it the fastest charge. Mine charged up in about 2 hours and gave me over 6 hours of vaping when I took it out for a weekend getaway.

If you’re trying to choose between the Crafty and the Mighty, you just have to figure out what is more important to you. While the vapor quality and production of each are nearly identical, the similarities end there. If you’re more about being able to carry your vape around town with you, then the Crafty is probably the way to go, as it’s considerably smaller in size. However, the Mighty’s enhanced battery life and ability to adjust temperature precisely without having to use your smartphone are big selling points. Take solace in knowing whichever you choose, you’re getting one of the best portable vaporizers on the planet.

I recommend purchasing the Mighty from this preferred and trusted retailer, as they ship for free and always include some free goodies with purchase.

Those turned off by the Crafty’s short battery life will really dig the Mighty’s dual lithium-ion setup. However, this feature greatly compromises the Mighty’s overall portability. With that said, we love the Mighty’s precise temperature control, as well as its ability to produce top notch vapor. This is easily one of the best vaporizers on the market. 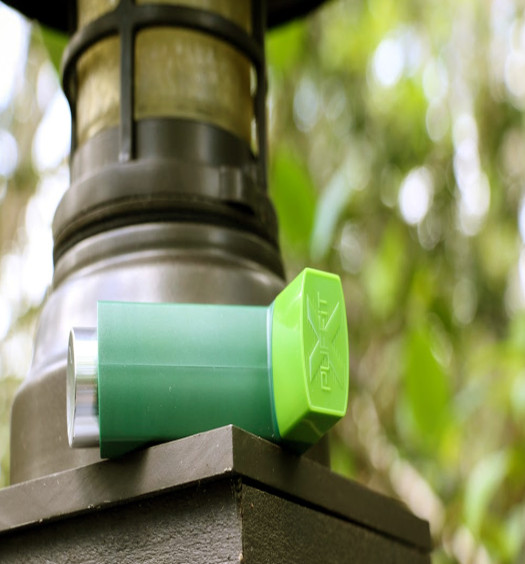 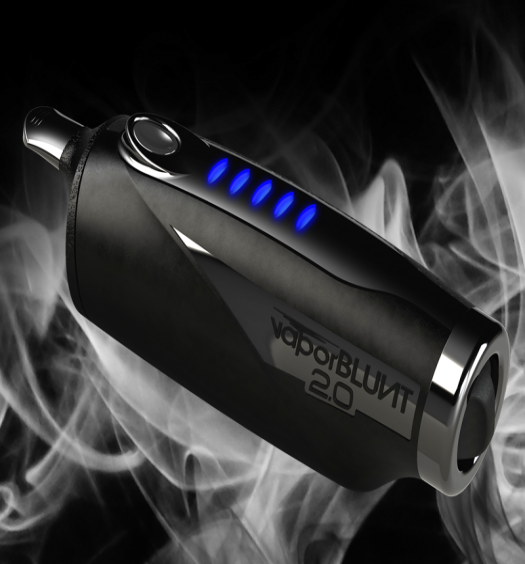