Election Day has come and gone, we now face a reality where Donald Trump is President of the United States. There are a lot of people out there who may have a difficult time coping with this. Luckily four states passed bills that will legalize the use of recreational marijuana. Unfortunately Arizona was not able to provide the country with a clean sweep, but four out of five is not too shabby. Let’s take a quick look at what we’ve got. 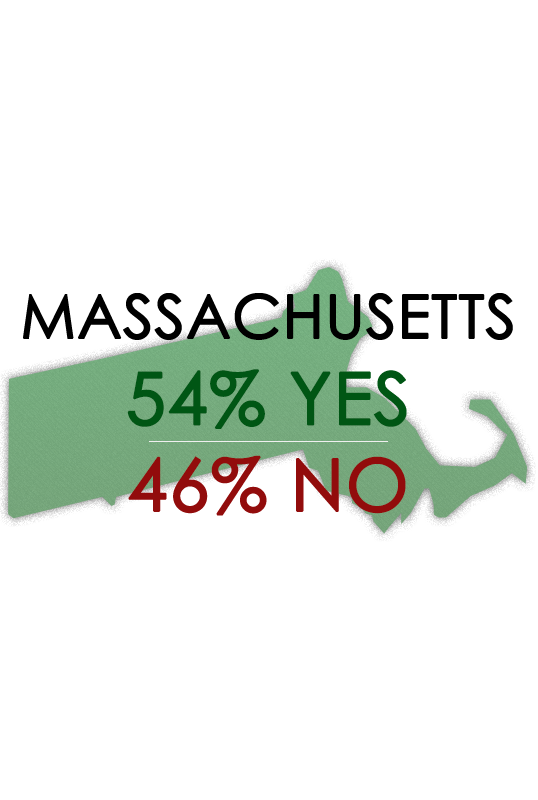 Result: 54% yes to 46% no
Taking the reins on the East coast, Massachusetts has voted in favor of a bill to legalize the recreational use, possession, cultivation and sale of marijuana. The regulation falls in line with that of alcohol. The law allows those ages 21 and over to possess up to 1 ounce of marijuana when outside of their residence and while at home, 10 ounces.

In order to properly regulate the bill, a three member Cannabis Control Commission will be setup with the initial appointment of members to be made by March 1st, 2017. And as far as the law itself, that goes into effect on December 15th, 2016. Massachusetts does not want to waste any time. 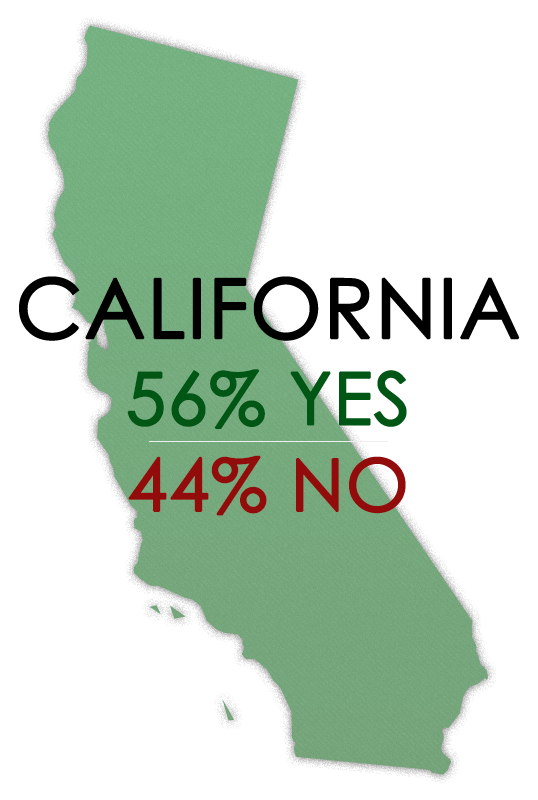 Result: 56% yes to 44% no
Rounding out the entire West coast (all the way up to Alaska), a proposition in California has passed to legalize the recreational use, possession, cultivation and sale of marijuana. 21 and up that is.

For a state that made a groundbreaking move back in 1996 when they became the first to allow legal medical cannabis, the Golden State was surprisingly slow to fully accept recreational marijuana. The California based Proposition 19 failed in 2010 and then Colorado & Washington made history in 2012. First. Those in the world’s sixth largest economy will have to wait however as the legality change does not go into effect until January 1st, 2018. 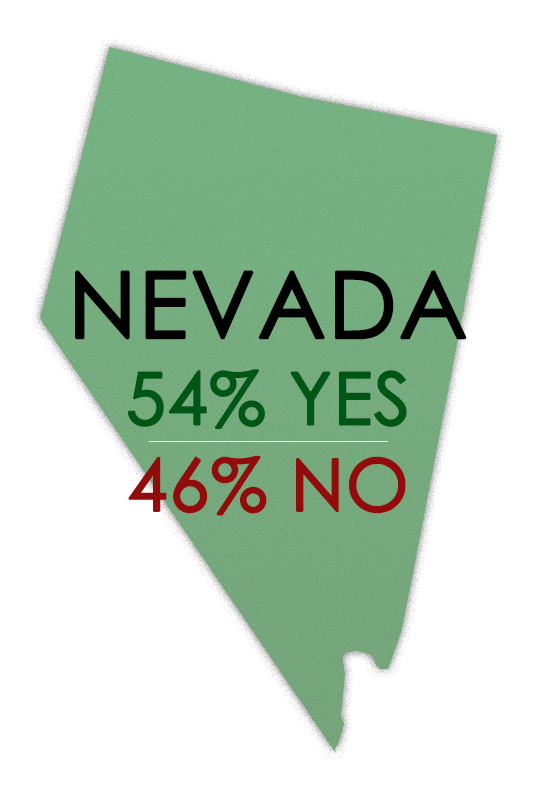 Result: 54% yes to 46% no
Fear, loathing and legal cannabis in Las Vegas. Following suite with their brethren to the West, Nevada has passed a bill to legalize the recreational use, possession, cultivation and sale of marijuana to those over the age of 21. For a political climate that has been shipping since 2008, it does not come has a huge surprise.

However we are talking about a state that used to have some of the harshest penalties against cannabis in the United States. So looking even further back, this is a HUGE victory. Licenses for recreational sales will only be offered to already established medical marijuana dispensaries. And keeping in line with California, the law goes live on the first of January, 2018. 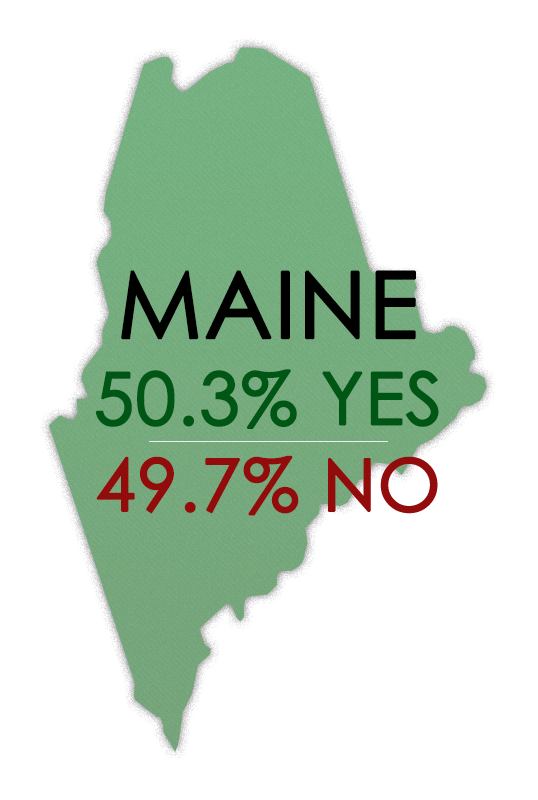 Result: 50.2% yes to 49.8% no
The jury is still out in Maine, but it is leaning slight in favor of yes at this time. Being optimistic, we are going to say it has passed (but our fingers remain crossed). Question 1, like the bills in the prior three states will legalize the use, possession, cultivation and sale of recreational marijuana for adults who are 21 and up.

Despite many prior attempts at legalization, this is the closest that Maine has come to locking in a win. If the measure does pass, there will be a jump from zero to two legal states on the East coast. Plus this would put more pressure on the federal government to reschedule cannabis, which is the overall goal. 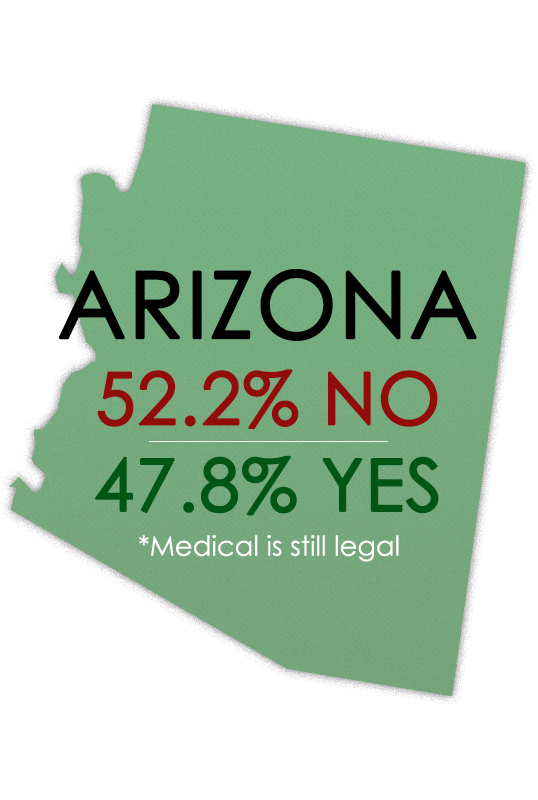 Result: 47.8% yes to 52.2% no
Although there is obvious excitement for all of the wins, there was a single loss that marred a potentially perfect recreational marijuana election.

Now batting a thousand isn’t an easy thing to do so we shouldn’t necessarily dwell too hard on the AZ loss. It was not a landslide by any means which shows that the state has an interest in legalization and perhaps that will not be for another two years or more, but the stage is set. At least Arizona has a medical marijuana program that will continue on as is.

The results from this election puts the total number of states that allow the legal use of recreational marijuana up to eight. The early birds were Colorado and Washington back in 2012 followed by Alaska and Oregon in 2014. This puts the population who lives in a recreational state to over 60 million people. With Colorado seeing over $996 million in legal sales, it is no surprise that other states are quickly jumping on board. And though there is still opposition out there, just remember what Bob Dylan said, “For the times they are a-changing.”

'Sconsin is our Midwest blogger. He came to Southern California by way of Vancouver after growing up in the cheese country outside Milwaukee. Besides vaporizing, his great loves are Packers football and movies. 'Sconsin has been known to quote movies from front to back. His personal favorites include Office Space, Dumb and Dumber, Ferris Bueller's Day Off, and Clerks. He owns a couple of forced-air and whip-style units, but his favorites are portable vaporizers. 'Sconsin is an especially big fan of the Source E-Nail, the Life Saber by 7th Floor, and the Arizer Air. He's the number one reviewer when it comes to detailed analysis. When he's not testing vapes, 'Sconsin fantasizes about tossing the pigskin with his hero, Aaron Rodgers, and building an epic home theater. It is his dream to be able to blog, vape, and watch movies or sports all from the comfort of a cozy bucket seat with a chilly Pabst Blue Ribbon by his side.
Submit a Comment