KandyPens recently released their latest and greatest wax pen innovation yet – the Gravity. The Gravity combines and improves upon the quartz and ceramic atomizer technology found on their popular Galaxy and Donuts pens. I had the chance to test one out over the past week – and here’s my review.

The Gravity features similar styling as the Donuts and Galaxy wax pens, but with a more stealthy and discreet ‘sandblasted black’ finish. If the Donuts and Galaxy wax pens were a little too flashy for your tastes, then the new Gravity is exactly what you’re looking for. KandyPens did a great job when designing the Gravity. When compared to other wax pens, very few can compete with the aesthetics of the Gravity. KandyPens always does a great job when it comes to their designs, and the Gravity is certainly no exception. 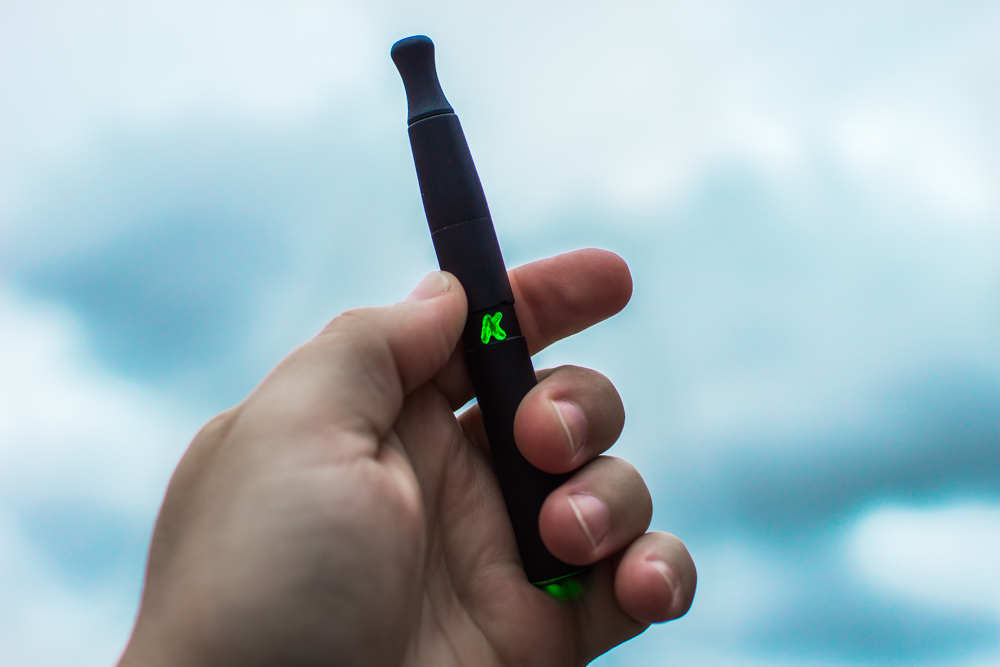 I like how KP decided to go a darker route this time around as opposed to the previous color options that were initially introduced with the Galaxy and Donuts wax pens. KandyPens eventually introduced darker color variations of the Galaxy and seemed to stick with that motif when designing the Gravity. Similar to the Donuts, the Gravity is one solid color with no accents.

The Gravity’s sandblasted black finish doesn’t just look super-cool, but also feels really nice in your hand. Instead of the Galaxy and Donuts’ glossy smooth feel, the Gravity, as ‘sandblasted black’ suggests, has a very satisfying granular feel to it, which I really like.

KandyPens recently made a tweak to the Gravity’s mouthpiece by adding a carb hole for increased functionality and improved airflow. The tip of the mouthpiece was also slightly tweaked to feature a glossy black finish which provides enhanced comfort as well as a nice aesthetic accent.

If you happened to purchase the Gravity before these change were made – worry not – as KandyPens will be supplying the upgraded mouthpieces to you at no additional cost. 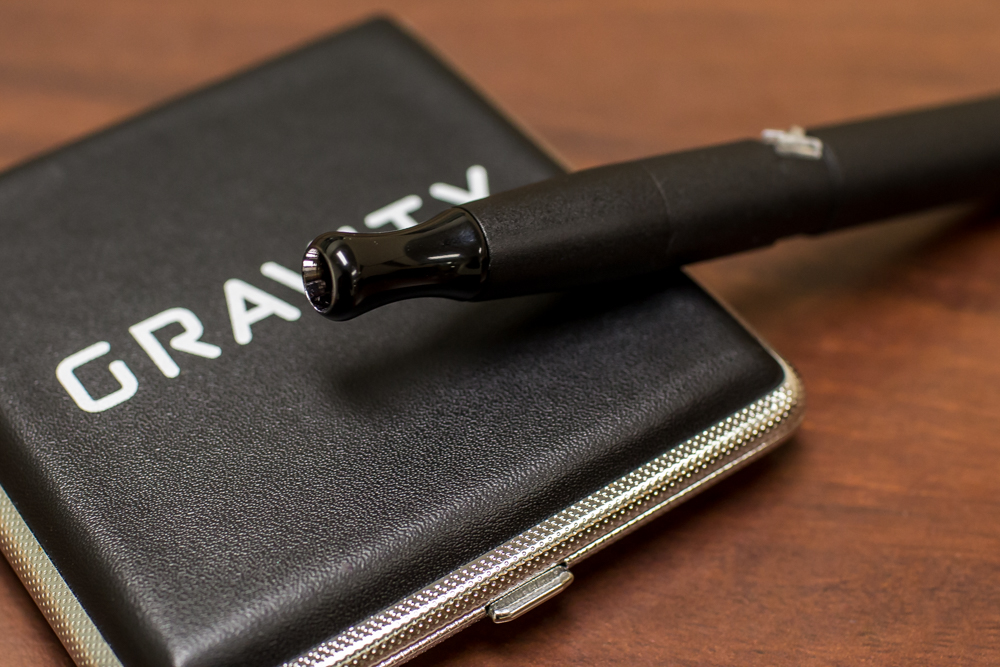 It always surprises me how the types of atomizer(s) a wax pen utilizes is often is overlooked by the consumer, when in reality it’s one of (if not the most) important aspects of the unit, and will greatly affect the type of performance you’ll get from the pen.

The first generation of wax pens to hit the market pretty much all featured single coil wicked atomizers which, as the name suggests, utilized a fiber wick wrapped in a coil. These types of atomizers eventually fell out of favor with consumers as fibrous wicks tend to affect the taste and also become gunked up very easily, as they absorb residual wax.

Ceramic rod atomizers were also very popular one time and are still utilized by some wax pens. These types of atomizers are used more with solid wax concentrates as opposed to liquid concentrates, and up until recently when quartz crystal was introduced were the main type of atomizer you’d find on a wax pen. 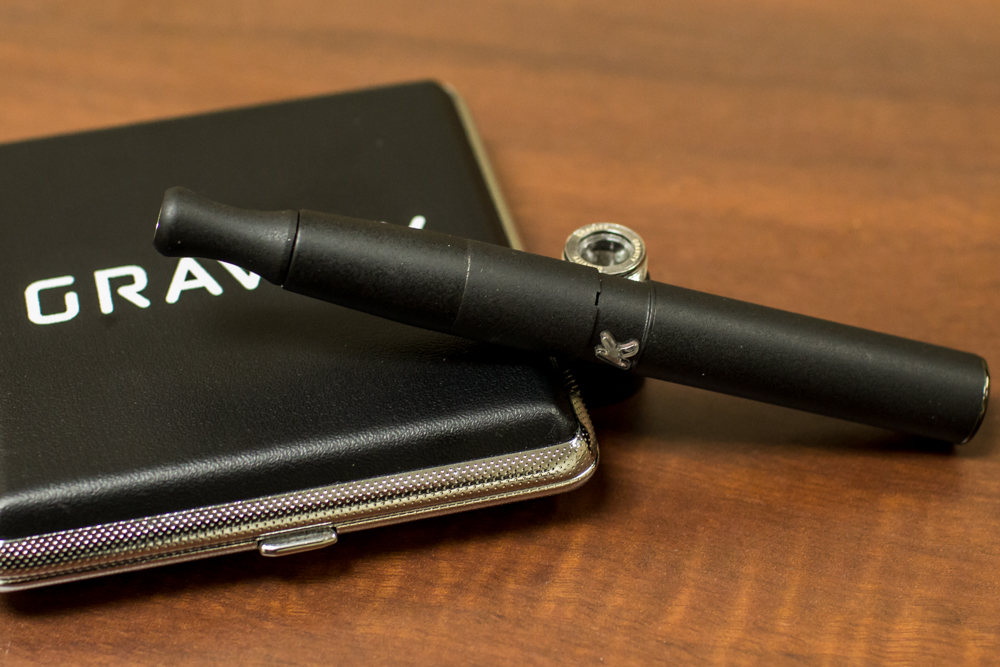 KandyPens was one of the first manufacturers to introduce quartz crystal atomizer technology as well as coilless ceramic dish atomizer technology, both of which were featured alongside the Galaxy and Donuts wax pens introduced earlier this year. While the atomizers of each are interchangeable between both units, the Donuts only included a ceramic dish atomizer and the Galaxy only included a quartz rod atomizer.

The Gravity Improves upon the design of both of these atomizers and includes both options. The Dual Quartz Rod Atomizer found on the Galaxy has been redesigned, and now features a quartz chamber as well. The Coilless Ceramic Atomizer has also been improved and redesigned, eliminating the hole in the ceramic dish.

Both atomizers feature high quality titanium coils, elevated airflow systems, as well as universal 510 threading, allowing them to be interchanged between any 510 compatible battery including Galaxy and Donuts batteries.

So what’s the difference between quartz crystal and ceramic atomizers and how will it affect your concentrates sessions?

Starting with quartz crystal, these atomizers are built from an inert material which, unlike ceramic or fibrous wicks, burns extremely clean and doesn’t leave any sort of aftertaste. By combining titanium coils with quartz crystal rods, the taste of your dabs when using the Gravity is extremely pure and flavorful. Quartz atomizers are ideal for connoisseurs who want to experience the true taste of their wax. 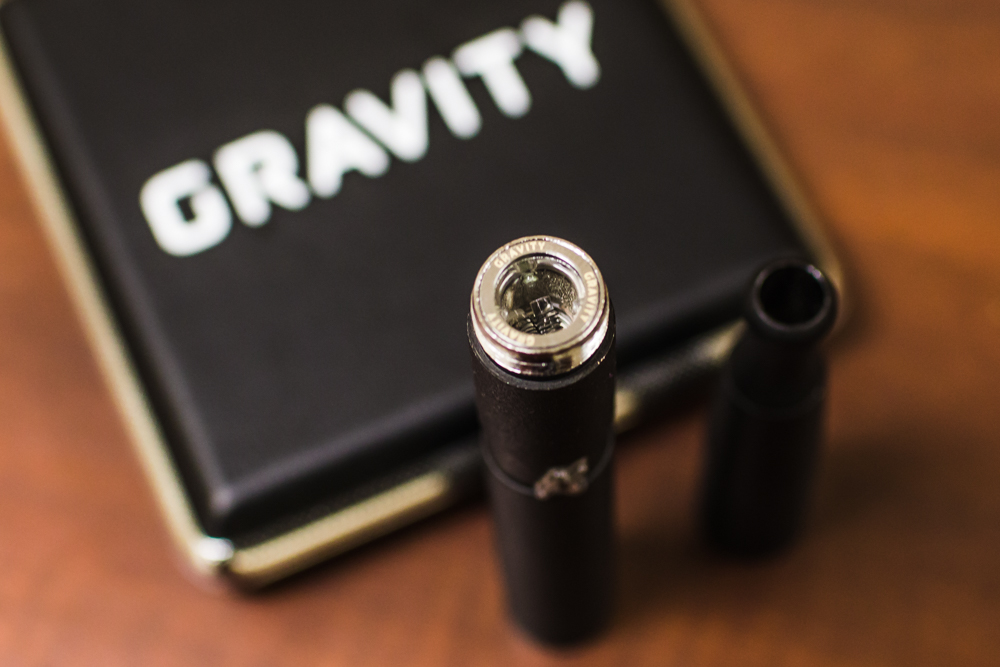 Because this quartz atomizer utilizes dual coils and rods, wax Burns extremely quickly and efficiently When compared to single coil atomizers. there are no wax pens that feature triple coil atomizers but personally I think this is overkill as it burns through X way to fast before you even really have a chance to enjoy it.

This quartz rod atomizer included with the Gravity has been updated to feature a completely quartz chamber, eliminating all non-quartz components and allowing for the purest tasting dabs possible.

For those looking for more casual and prolonged sessions, the new and improved coilless ceramic atomizer is where it’s at. This atomizer does not have any exposed coils, wicks or wires – instead utilizing a ceramic plate. This allows wax to burn very slowly and at a lower temperature when compared to atomizers that utilize exposed coils. Even though ceramic is not a inert material, because wax is burning at such a lower temperature, the taste of wax is greatly improved. 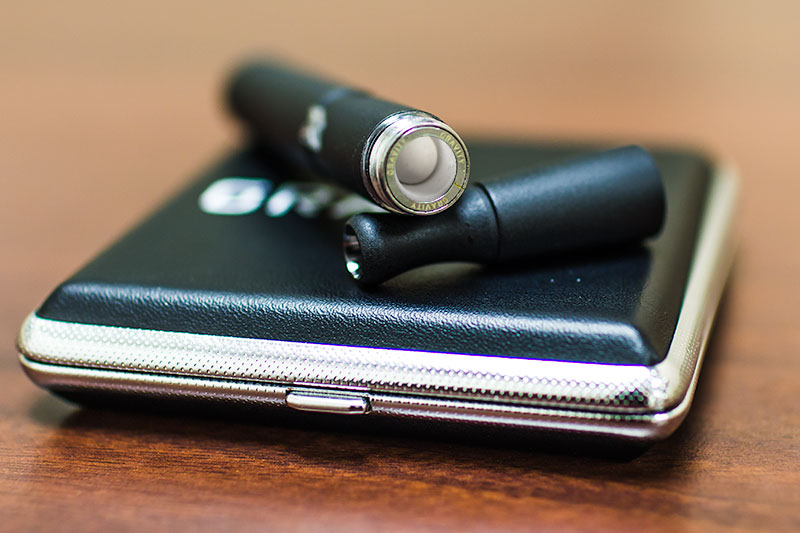 The ceramic dish atomizer included with the Gravity is very similar to that included with the Donuts except that the ceramic dish at the bottom of the chamber is completely filled in with no hole in the center. I’m not exactly sure what purpose the whole served in the previous version of this atomizer (I’m guessing it has to do with airflow), but I do like the fact that it’s not filled in as it prevents wax from seeping beneath it and gunking up the area of the atomizer which is unable to be cleaned.

Also improving upon the temperature controlled batteries found on the Galaxy and Donuts wax pens, the Gravity’s battery lets you choose between four different temperature settings instead of just three. Clicking the power button three times once powered on allows you to toggle between the Gravity’s preset heat settings of 300°, 350°, 390° and 430°F.

I love the fact that we’re now seeing wax pens with temperature control options, as not everyone likes to dab in the same way. Some people prefer lower temperature dabbing for more casual and prolonged sessions, while others prefer to juice the temperature up all the way up for fast and effective sessions. Personally, I find higher temps to be best suited for wax vaporization, but the more options the better. 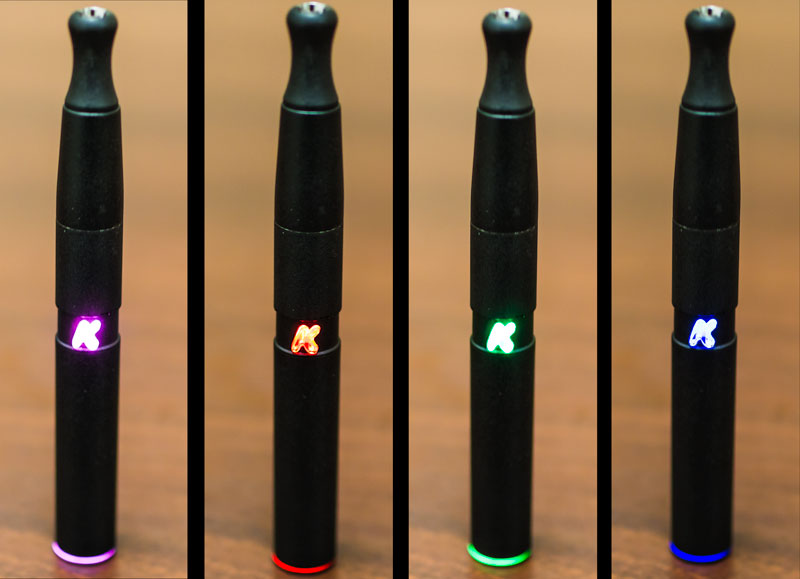 The best part about the temperature control battery that the Gravity utilizes is that like all KandyPens batteries, it’s covered under an industry-leading lifetime warranty. That means that no matter what happens, the Gravity’s battery is covered and will be replaced by KandyPens with no questions asked. A warranty like that in the vaporizer industry is extremely rare and even more rare in the wax pen genre. The fact that KP covers the Gravity with a lifetime warranty shows how much they stand by their products, which is very reassuring to consumers.

COMPARED TO THE COMPETITION

Some people will compare the Gravity directly to the new Dr. Dabber Aura pen, which features similar styling. However, in my opinion, Dr. Dabber went a step too far when replacing 510 threading with the magnetic connection technology employed by the Aura. While I do like the Aura, I feel like eliminating universal 510 threading (while it may be a cool feature) kind of restricts the consumer, as replacement parts must be designed exclusively for that specific unit.

The Gravity on the other hand features familiar 510 threading, allowing atomizers, batteries and mouthpieces to be interchanged at will, without having to worry about exclusive snap tech technology from Dr. Dabber.

The atomizers included with the Gravity and Aura are pretty similar, but as I mentioned earlier, I’d give the the advantage in this category to the Gravity because of their cross-compatibility.

From a price perspective, both of these units are in the same ballpark and will appeal to many of the same consumers. However, do to the fact that the Gravity is covered under a lifetime warranty (as opposed to the Aura’s one year warranty), the choice of the Gravity over the Aura is pretty clear for me.

Based on appearance people will also compare the Gravity to Puffco wax pens. While they may look similar the technology and features of the Gravity far outweigh those of any Puffco pen. And when you take into account the lifetime warranty that KP offers, there’s really no comparison between the two. I’ve personally never had good luck with Puffco products, and wouldn’t recommend them.

If you’re in the market for a new wax pen, there’s really no better choice than the new Gravity from KandyPens. For the same price as most other wax pen vaporizers, the Gravity offers unparalleled styling, advanced atomizer technology, a temperature control battery and an industry-leading lifetime warranty. There’s no other wax on the market that can match the Gravity’s versatility, styling and dependability. 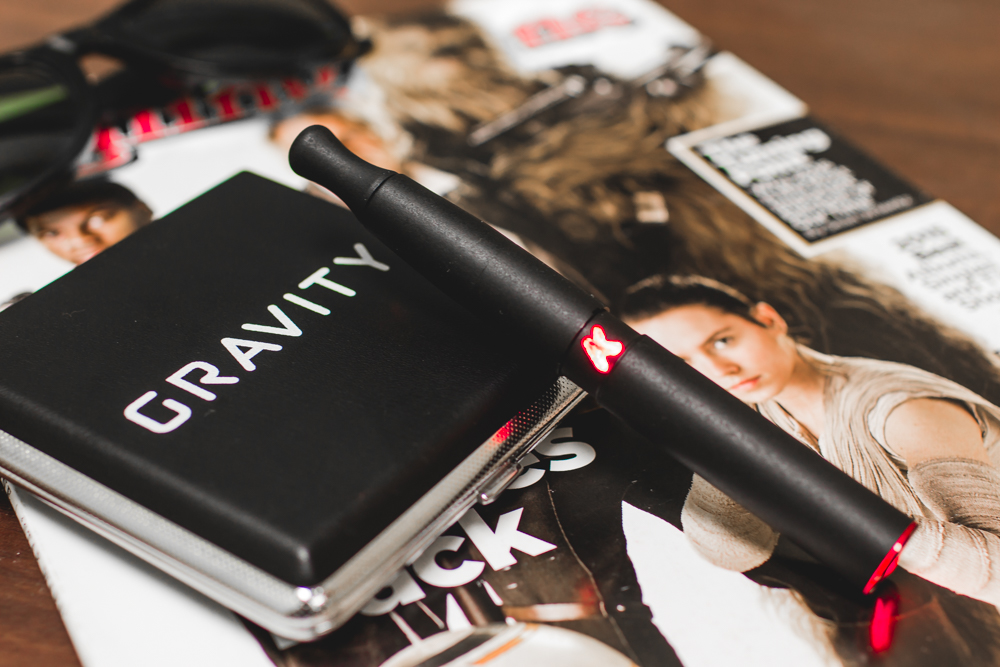 We recommend picking up the Gravity from this online vaporizer store, as they ship for free and include some free goodies.