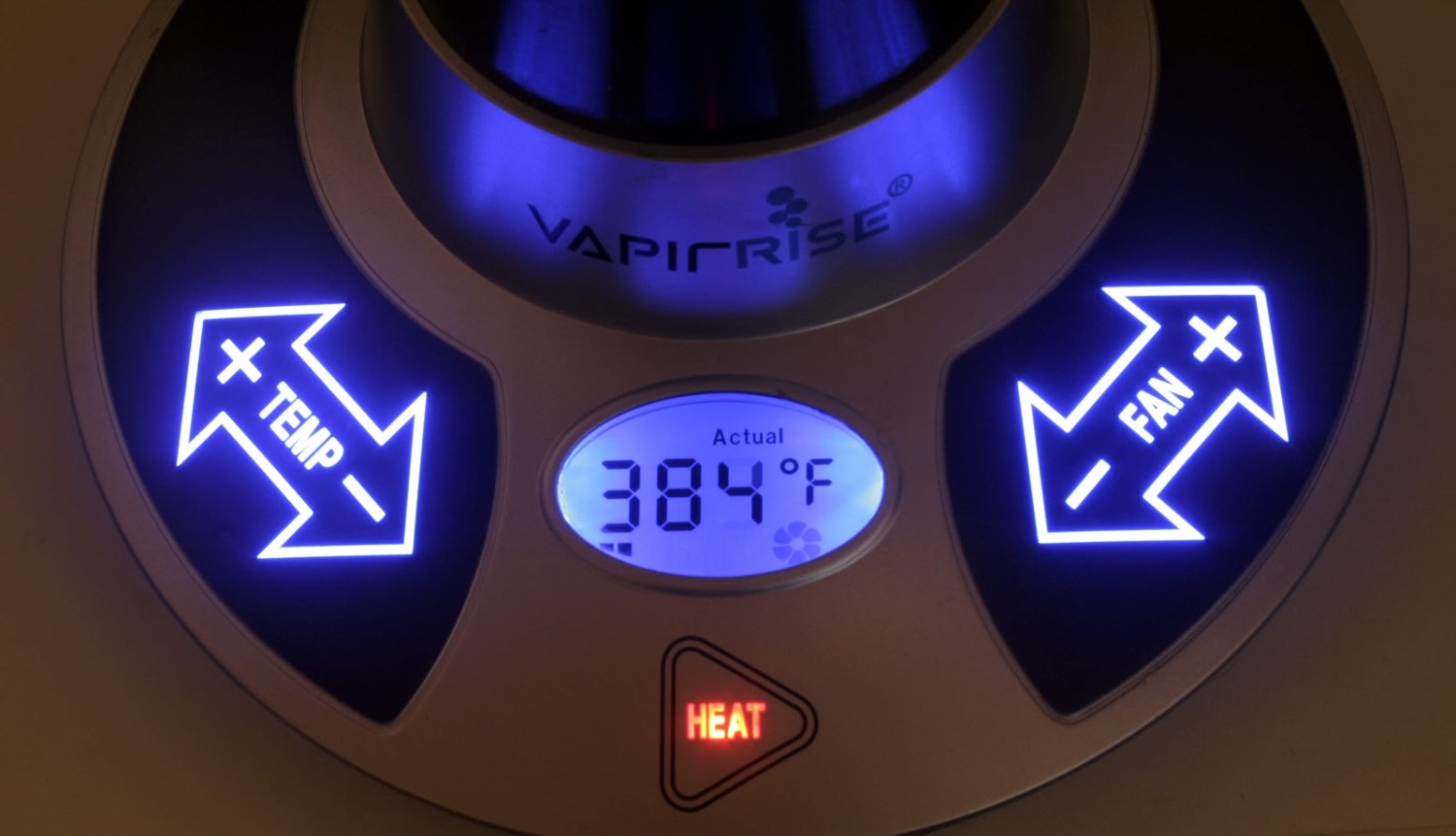 The Rise is the first desktop unit to be produced by the company Vapir, inventor of the NO2 portable. This vaporizer features dual functionality, being able to fill balloon bags or provide direct hits through the whip system. The large digital display allows users to clearly read the set temperature in either Fahrenheit or Celsius, for precise vaporization. A stainless steel construction throughout the vapor path provides excellent flavor at any temperature. And unlike some other balloon vapes, the Rise valve has a locking function for easily passing the bag around or leaving a little vape for later. Also included is the multi-user adapter that turns the Rise into a hookah style unit, catering to groups of people looking to vaporize at the same time.

With the Vapir Rise, users are given a choice when it comes to the delivery method and it is incredibly easy to switch between the two. The whip setup is for those who like the control that can be achieved when drawing directly from the vaporizer. Simply load a little material into the herb chamber, connect the tubing and start inhaling. The fan begins to run when the unit is turned on and will assist in the vapor production. Using the bags is as simple as removing the whip and connecting the balloon adapter, the herb chamber does not even need to be removed to make the change. Always remember to open the valve on the adapter to allow the vapor to flow into the bag, as forgetting to do so can cause the unit to overheat. After vaporizing, use the hot chamber grabber to safely remove the herb chamber. 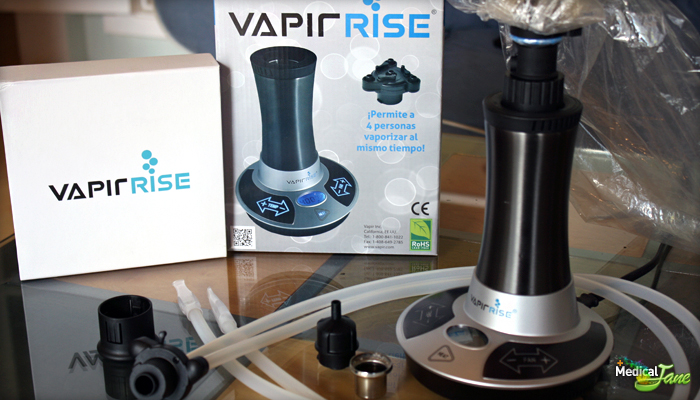 The design is similar to the solid valve available with the Volcano vaporizer. The bags require assembly upon first use and for someone new to vaporizing, this can be a little confusing. The instructions included with the Rise are very detailed and after constructing one the first time, it does become easier. What’s truly different from the Volcano is the locking feature that can be turned to prevent any vapor from leaking out when not inhaling from the bag, whereas the Volcano’s solid valve is unlocked by pressing in on the mouthpiece.

WHY IS THE FAN ALWAYS RUNNING?

The fan on the Vapir Rise will begin to run the moment the vaporizer is turned on. This is designed to expel heat from the unit and assist in vapor production. If the herb chamber is left down in the unit for too long, it can block the path and lead to overheating. The fan starts at the lowest level, though there are nine total speeds in which it can be run. A lower speed when beginning to fill the bag will create a denser vapor and a higher level will fill the bag at a quicker rate. Be sure to experiment with fan settings to find the optimal one for desired thickness.

HOW WELL DOES THE MULTI-USER ADAPTER WORK?

The Rise features an adapter that allows for up to four whips to be connected at the same time. One frustrating aspect of direct draw vaporizers is gathering around the unit and sharing a whip with the person next to you. Perhaps the head to your right takes very large rips and the herb is basically spent by the time the whip is in your hand. The multi-user adapter fixes that issue and let’s everyone take a hit at the same time and at their own pace, no pressure to take a quick draw before passing it on. What’s also great about the adapter is being able to control how many tubes are connected at one time. The other holes can be plugged if not in use to prevent any loss of vapor.

WHAT IS THE BEST WAY TO FILL A BAG?

The valve setup included with the Rise is very similar to what comes with the Volcano vaporizer. Cover the surface area of the herb chamber, less is more. Once your Rise has reached the desired temperature setting, insert the herb chamber into the unit. As the fan is already running, hot air will start to pass over the herb. When the Rise begins to emit a light misting of vapor, connect the balloon adapter and be sure that the valve is open. This method will prevent the bag from filling with hot air prior to any actual vapor production. The bag will fill with vapor, becoming denser the longer the herb is heated.

DOES IT WORK WITH CONCENTRATES?

Though an additional chamber is included for use with concentrates, the design is slightly flawed. The solid metal chamber has small holes up at the top to allow airflow, but not enough to create a solid draw. After an attempt at use, the waxy concentrate was mostly gone or stuck to the chamber, but little to no vapor had been produced. However, this little chamber can be used as an aromatherapy dish to permeate a nice scent throughout a room.

The closest competitor to the Vapir Rise has got to be the Arizer Extreme Q vaporizer. Both feature the dual functionality and digital temperature displays. The Rise does offer more fan speeds, but the Q’s fan can be turned completely off and some prefer that when going with direct draw. Another big difference is the valve setup; the Rise can lock the vapor in for passing around the bag. The Extreme Q does not offer this feature and relies mostly on glass components which can get very hot.

The Rise is a cost effective alternative to a lot of the balloon bag vaporizers available on the market. The valve system does not require one to hold their finger over the mouthpiece, but instead can be locked to seal in the vapor. The digital display is exceptionally large and very easy to read, plus the unit reaches the set temp within a minute. The ability to fill bags, use a whip or even multiple whips does set this vaporizer ahead of many other desktop units. Though the oil chamber does not truly work to vape concentrates, it is a nice addition when it comes to using it for aromatherapy. The multi-user adapter is a way fun to share your vaporizer in a hookah style setup when having one or many friends over. The Vapir Rise is certainly a multifunctional and high quality vaporizer that allows you to really taste your herbs.

We recommend purchasing the Vapir Rise from this trusted retailer. They will upgrade you to priority shipping at no additional cost.

A very cost effective option for a person looking for dual functionality and it features a well designed valve system that can store the vapor. 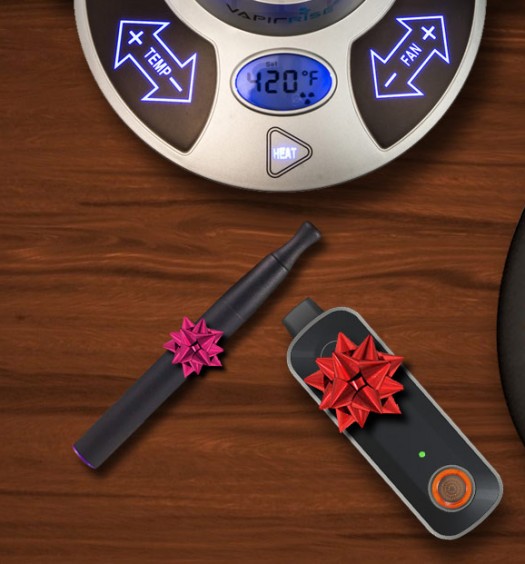 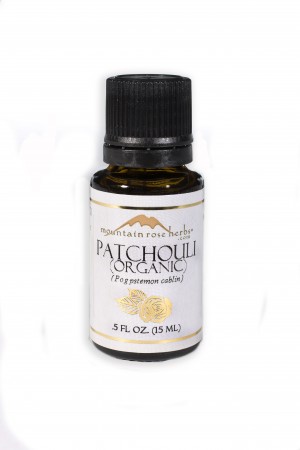