I recently got my hands on the H2FLO portable herbal vaporizer from Flytlab. There’s not a ton of information out there about this vape or the manufacturer, so I was excited to get a chance to put it through its paces and see what it’s all about. Let’s get right into it.

One of the first things that I always look at when checking out a new vape is the packaging. It may seem silly, but I think the way the unit is packed gives you some decent insight into the the vaporizer itself. You can tell Flytlab took some time (and spent some money) to make sure the packaging looks very clean and professional. Interestingly enough, one of my favorite portable units, the Arizer Air, comes in a plain, nondescript box. That being said, you can’t place too much stock in packaging, but it’s always nice when the unit is presented well. 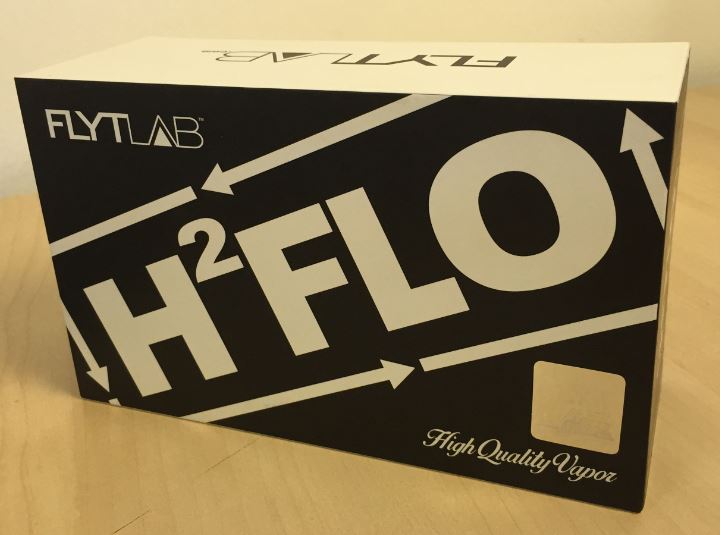 Right out of the gate, it’s apparent that the H2FLO is pretty unique. As far as I can tell, the design is proprietary. With all the re-branded crap units that have recently been flooding the market, it’s nice to see a vaporizer that brings a little bit of imagination to the table. It features a modular design, with a few different attachments and modes of operation to keep things interesting. I did notice that everything sort of had a “factory” smell to it (almost like when you open up a new pair of shoes), so I’m hoping that dissipates over time and doesn’t become an issue.

There’s four main components to the H2FLO: the vaporizer itself, a flow control valve, vapor chamber and water chamber. The flow control valve allows you to carb your hit. I’ve never seen a vaporizer with carb control before, so that’s pretty cool. The vapor chamber is meant to be used in conjunction with the carb control, so you can build up vapor before taking a rip. Again, pretty cool feature. Lastly, the water chamber attachment can be used to moisturize and cool your hits. There’s obviously a bunch of portables that offer water attachments these days, but I like the fact that this one comes standard with the unit. 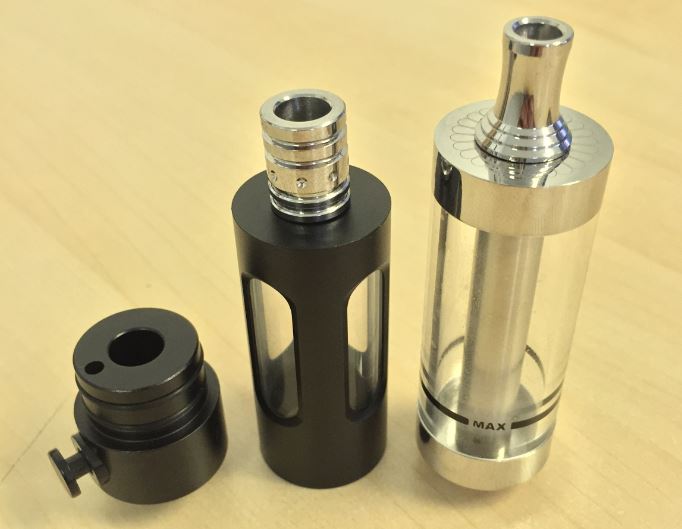 The H2FLO is pretty simple to operate. The top cap unscrews to expose a ceramic heating chamber, which looks like it holds about .4 grams (pretty standard). Originally, the ‘FLO’ featured a metal heating chamber, but somewhere along the line they switched to ceramic, which I think was a smart move. Once you’ve packed the chamber, press the power button three times to power on. The light will flash white, then red to signify heating has begun. Optimal temperature is reached in about a minute (also pretty standard), at which point the red light turns to solid green. 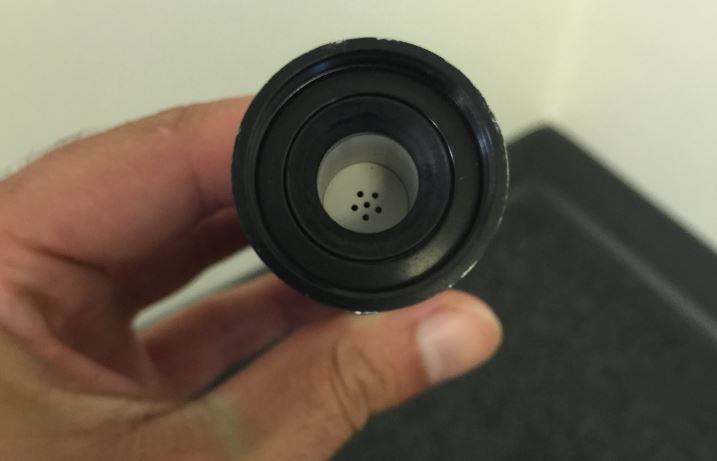 The big thing I noticed about this unit is that there is no temperature control. Once powered on, the H2FLO heats and stays at a constant temperature. I checked out the Flytlab website, as well as a couple retailer sites, but was unable to find exactly what temperature the unit heats up to. I view this as a drawback, as being able to adjust temperature based on preference is pretty much a necessity in my mind. In fact, I’d venture to say 95% of portables offer at least a couple preset temperature settings.

In recent memory, the only true vaporizer I’ve reviewed that operates at one set temperature is the Cloud V Phantom. My big complaint (and pretty much everyone else’s) about the Phantom was that the single preset temperature was too high, resulting in hot, harsh vapor. This led Cloud V to eventually release a ‘Premium’ version of the Phantom, with three selectable heat settings. That being said, I’m hoping the H2FLO doesn’t run as hot as the original Phantom.

There are four different ways to use the H2FLO: Basic, Fancy, Cool and Ultimate modes (these are the names given in the user guide). Let’s explore each mode and see how they perform.

This is by far the most portable setup of the four, and only requires the unit itself and the mouthpiece attachment. No frills here. Your herb is heated, and you inhale. I found the vapor produced in ‘Basic’ mode to be surprisingly thick and strong, which to me, signified that the single preset temperature the H2FLO operates at is probably close to or exceeds 400°F. This unit’s ‘Basic’ mode is very reminiscent of my experience with the Cloud V Phantom. The vapor production is good, but tends to get a bit hot towards the end of the session. All in all, pretty decent. 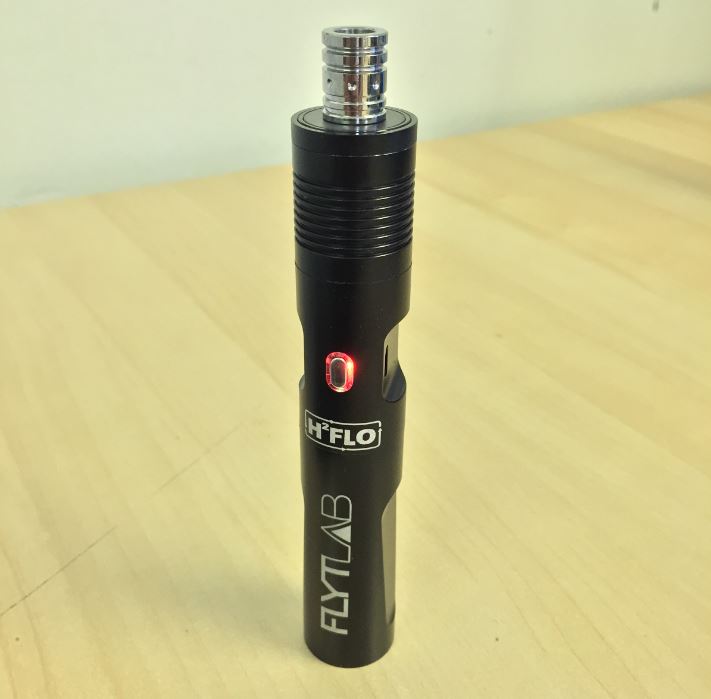 Now we get to see what the flow control valve (carb) is all about. In ‘Fancy’ mode, the carb valve is attached to the vapor chamber, which then pops right into the unit. I like this mode a lot, because you can use the flow control and allow the vapor chamber to fill completely before taking a rip, resulting in bigger plumes of vapor. Like ‘Basic’ mode, I found the vapor production in ‘Fancy’ mode to be really nice, and enhanced by the ability to carb your hit. It’s worth noting that with the carb and vapor chamber attached, the H2FLO stands about 9 inches tall. So even though vapor production is really nice, it’s not necessarily super portable in this mode. 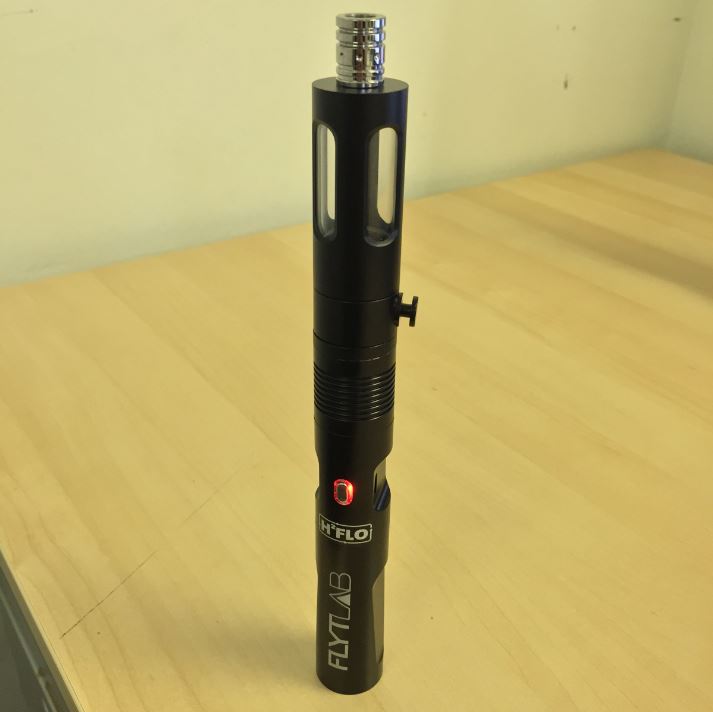 This mode utilizes the included water chamber attachment, which is used to filter and cool down the vapor produced. The flow control valve is not used in this setup – only the water chamber and vaporizer itself. Considering the H2FLO runs a bit hot, I really like this mode because it sort of cools everything down. The vapor production is still really strong, and probably the best tasting of all the modes we’ve discussed thus far. Like ‘Fancy’ mode, the water chamber attachment in ‘Cool’ mode adds a considerable amount of height to the unit, and isn’t something you’d be able to carry around and conceal easily. 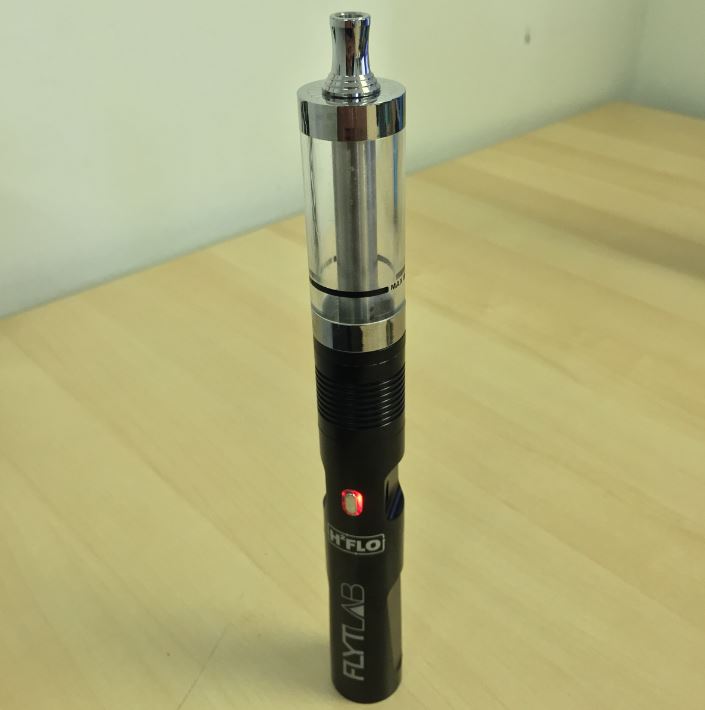 While not shown on the manufacturer’s website, the user guide states that you can connect flow control + vapor chamber + water chamber to form ‘Ultimate’ mode (or as it’s known here at VaporizerReview headquarters – ‘Wizard Staff Mode’).

I must say, the unit looks a little silly with all these attachments stacked up onto each other. It kind of reminds me when you used to stack Sega Genesis or Super Nintendo cartridges on top of a Game Genie and Game Shark. With everything attached, the H2FLO stands almost a foot tall, so yeah – a little crazy. However, as funny as it may look, the unit actually performs pretty well in ‘Ultimate’ mode. The ability to use the water chamber in conjunction with the vapor chamber and flow control result in a pretty unique experience. 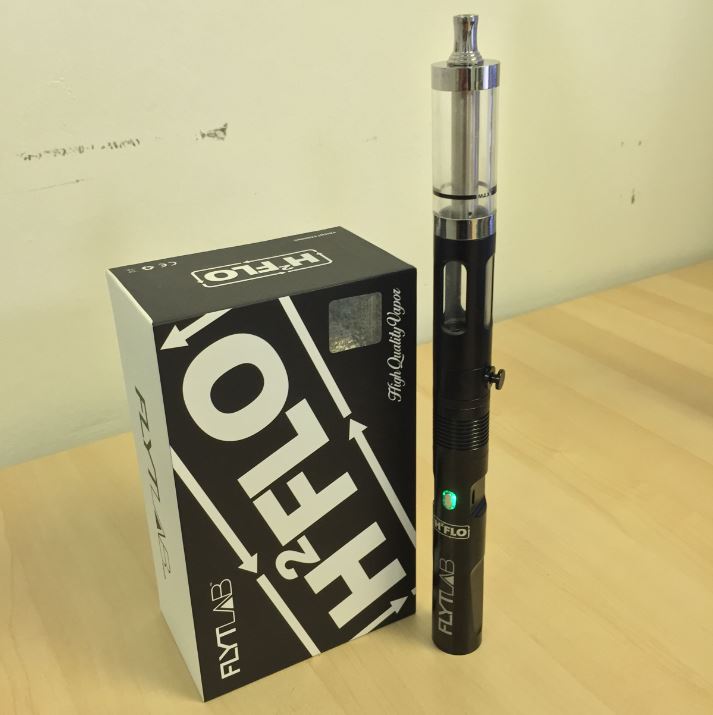 As I’ve stated throughout the review, I’m pretty impressed (and surprised) by the vapor production of this unit. I kind of had the idea that it was going to be all gimmick and no substance, however, in each of the four modes of operation, I found the H2FLO produced some thick, tasty vapor clouds.

Aside from performing quite well, I’m also a big fan of the overall versatility of this unit. While most other portable vaporizers are WYSIWYG (what you see is what you get), I like how Flytlab thought outside of the box when designing the H2FLO. Giving users the ability to customize their vaporization experience is something I think is pretty cool, and unique.

My biggest gripe with this unit is the lack of temperature control. As I suspected, it does run a bit hot, so the vapor can get a bit harsh. I typically prefer to vape around 380°F, and this feels like it runs closer to 400°F. Again, I wasn’t able to find out exactly what temperature it sets itself to, but it’s a bit on the warm side for me.

Additionally, I’m not a huge fan of the way the different attachments connect to the unit and each other. They don’t screw in or utilize threading, but instead use O-Rings to sort of “pop” into place. Everything seemed to stay nice and tight when I used it, but I can see the connections loosening up and becoming an issue over time.

Lastly, I have an issue with the overall portability of the unit. In ‘Basic’ mode, you can definitely conceal it and bring it with you on-the-go, however, once you start stacking up attachments, it just becomes too big and bulky to carry around.

The H2FLO is great if you’re a vape enthusiast who’s interested in building up your collection. However, it’s not something I would consider an “everyday vape”. While I do think think it’s a pretty cool unit overall, there are better, more practical options out there at the price point. With that said, if you already own a vaporizer that you’re happy with, and are just looking for something new to add to the rotation, then the H2FLO will certainly serve that purpose.

If you’re interested in purchasing the H2FLO, I recommend purchasing it from this trusted retailer. They will ship it for free and throw in some additional free goodies as well.

While I appreciate the unique design and functionality aspects of this vaporizer, I wouldn’t necessarily call it a “must-have.” It does perform better than expected, and all of the included attachments give it great versatility. However, it’s not exactly the most practical portable vaporizer I’ve ever seen, but it is one of the most interesting. I actually think the H2FLO is more suited for home use, rather than on-the-go. It retails for $199.99, which is reasonable considering how versatile the unit is, and how well it performs. If you have the means, go ahead and add it to your collection. 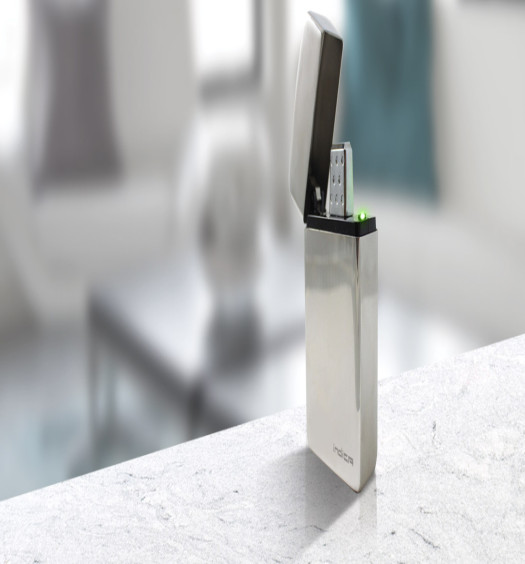 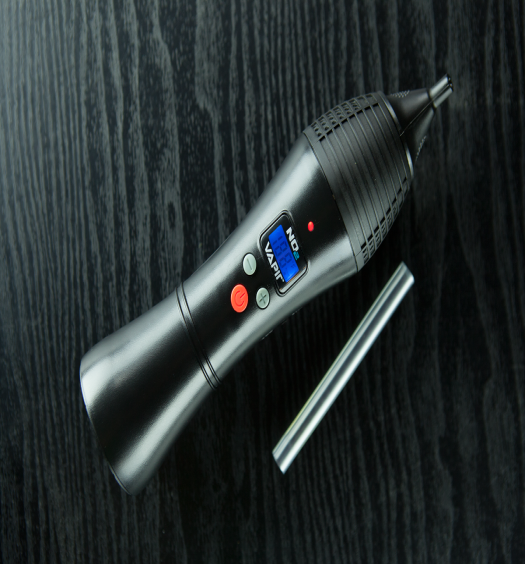