The upcoming holiday season is the perfect opportunity to give the gift of vaporization. What better way to show your friends and loved ones you care than by introducing them to a better way to medicate? To help take the stress out of gift giving, we’re pleased to present our 2015 Holiday Gift Guide, featuring wallet friendly goodies that are sure to put a smile on the face of that lucky someone. Happy holidays from Vaporizer Review!

The Solo is very near and dear to our hearts here at Vaporizer Review, as I personally received one as a xmas gift a couple years back. I’ve had it ever since, and while the Vapir Prima is currently my go-to portable vape, the Solo held that title for quite awhile. What’s so great about the Solo? Phenomenal build quality, multiple heat settings, long battery life and lifetime warranty. Released way back in 2011, the Solo stands the test of time, and is still more functional and reliable than most units being released these days.

This is a great gift for someone who’s seriously interested in the health benefits of vaporizing, but doesn’t want to break the bank. You can find the Solo for under $200 on various sites, but one of our preferred retailers is currently selling it for just $168.99. That’s a spectacular deal when you consider that the Solo will last for years to come.

There’s certainly no shortage of wax pen vaporizers on the market today, and they all operate pretty similarly for the most part. However, there are a couple new offerings from KandyPens that, in our opinion, are the top of the crop. Both the Donuts and Galaxy feature excellent build quality, fashion-forward styling, a temperature controlled battery, and an industry leading lifetime warranty.

The thing that really sets these two pens apart from the competition is their uniquely designed atomizers. The Donuts features an all-ceramic atomizer free of wicks and coils for a slow, controlled burn. The Galaxy utilizes a more traditional style atomizer, but replaces standard ceramic with quartz-crystal rods wrapped in titanium coils for clean, pure tasting dabs. In addition, atomizers are interchangeable between units.

Both the Donuts and Galaxy retail for $99.95, and are a great way to earn some brownie points with that special someone this holiday season.

The Vapor King is a hands-free desktop vaporizer with precise temperature control. The style of the unit is a bit of a throwback, but the digital display gives it a nice modern look. These types of “box” style vaporizers have been around for awhile, and remain popular with vape veterans and newbies due to their simplistic nature. The Vapor King is a no-frills type of unit, but is certainly functional and reliable. 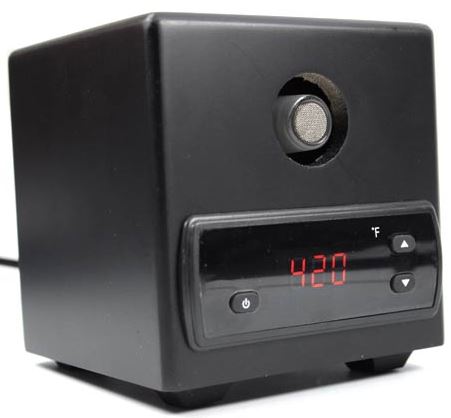 Aesthetically, the Vapor King looks a lot like the Hot Box, but features temp control and costs about half as much. The VK is available in three colors (black, silver & red), and in two different models: one that utilizes a dial for temperature adjustment, and one with up/down buttons. The Vapor King regularly retails for around ninety bucks, but is currently only $49.99 on holiday special.

The G Slim is an awesome gift idea for someone who may not be totally sold on vaporizers, but is interested in seeing what they’re all about. While the G Slim isn’t a “true” vaporizer, as it heats through conduction, it’s still a super-discreet and affordable way to medicate. Ideal for winter months when staying warm and “toasted” is a must, the Slim is a convenient way to toke while brushing the snow off your car or shoveling the walkway. Priced under $20, the G Slim Herbal from Grenco Science makes an awesome stocking stuffer.

The G Slim is available in three different varieties: Herbal, Wax & Hookah. Tanks and cartridges can also be purchased separately, so if you buy the herbal setup, you can also grab the wax cartridge and e-juice tank for added vaping versatility. Additionally, Grenco just released the Fader 100 Edition, which is the first G Slim model equipped with separate Ground Material, Concentrate, and Hookah tanks included.

For the daily dabber in your life, the Quartz pen from Vaporite is a great option. Wax concentrates have become super popular over the past few years, but many new patients have been reluctant to give it a whirl due to the high prices of desktop rigs and e-nails.

With that said, wax pen vaporizers are an affordable and user-friendly way to enjoy dabs, shatter and crumble.  The Quartz includes an 1000mAh battery, two single-coil wicked atomizers and a glass globe attachment.

Something else that’s pretty cool about the Quartz is that it’s Bluetooth enabled. Downloading the Vaporite App (for Andorid or iOS) allows you to sync the pen to your smartphone and gain access to usage stats, as well as temperature and battery levels. Vaporite also covers the Quart’z battery under a lifetime warranty, which is a nice bonus. Regularly sixty bucks, this retailer has it on holiday special for just $30. That’s a tough offer to pass up.

Here’s one that we’d be STOKED to see under the tree this year. The viVape from Vaporfection is a very cool dual-function desktop unit. It’s a forced air vaporizer that allows you to choose between balloon bag and whip vapor delivery methods. The viVape has a nice modern look to it (kind of reminds us of a big iPhone), and utilizes a nifty touch screen where you adjust temperature, shutoff time and delivery method.

The viVape typically sells for around 250 bucks, but one of our preferred online vape shops has it on holiday special for just $179.99! That’s a frickin’ sweet deal when you consider other popular dual-function forced air vaporizers like the Vapir Rise and Zephyr Ion are considerably more expensive, and neither of which look quite as sexy as the viVape. This unit would make an amazing gift for the vapor enthusiast in your life. Don’t sleep on this deal!